Yesterday I posted about my pumpkin pie oats and I decided last night that I would go with the same thing this morning just change it up a bit by putting it in the crock pot over night. Luckily my crock pot came with something called the little dipper and it was the perfect size to fit this meal in. I followed the same recipe as yesterday just let it cook sloooww over night and when I woke up the next morning I was not disappointed. I previously had only soaked the oats over night in the fridge and this was my first attempt at using the slow cooker to actually warm cook them. I sprayed the cooker with a little coconut oil because reading (yes I actually read something) online about how people would slow cook oats I found a lot were having issues with them sticking to the sides. So after I sprayed the sides I just poured the oats mixture in and put the lid on and let it roll over night!

Oats in the crock pot.

Ssshhh they are sleeping!

When I woke up in the morning I was happy to see that one they not only had not boiled over but also were nice and thick! As I stirred it up in the crock pot I could feel I was scraping a crust off the sides. This turned out to be possibly the best part of the entire experience. It was filled with flavor and the texture could not be beat! Once I had them all mixed together I grabbed a bowl and the rubber spatula and got every last bit out, wasn’t leaving anything behind of this tasty treat! I tried to slowly enjoy them, the fact they were actually hot because of them being cooked really helped, but they were so good they didn’t last as long as I would have liked!  TRY THIS COOKING METHOD FOR OATS! I know it can be tough if you are trying to just make a single serving because trying to do that in a full size crock pot can be tough. That is actually the reason I hadn’t tried it because I would have had to do like 4 servings and trying to figure that out cooked is not something I had the time to try to figure out. I highly recommend trying to find a small enough pot so that you can cook this way. Tonight I think I am going to try it with my Key Lime myoatmeal.com blend and some banana instead of pumpkin, but tomorrow is another 60 carb day so it would be one serving and I might not be able to get the banana to fit. Pumpkin is lower carb so I might get it to work just wondering how key lime, white chocolate, graham cracker pumpkin oats would be? Hey YOLO right?

What a sight to wake up to!

Yesterday I got an order from Michel De France with a bunch of their amazing crepes, soy wraps and some thicker soy wraps called Norigami. For my post workout meal I decided that I would give the thicker soy wraps a try heck for 1 carb, 1 fat and 2 protein why not! They were chili flavored and had chili flakes in them which made them even better! Before hitting my cardio last night I stopped at QFC and picked up some Boar’s Head and one of the meats I got was the chipotle chicken breast so I decided I would use this, some asparagus and FF cream cheese as the filling. So after a monster shoulder and arm day I hopped on the Harley and headed to the office to get work done and hammer down this wrap. One concern I had was how the wrap would hold up since it was a little thin but there were no tears or anything so it passed that test! Next of coarse is one of the most important test and that is how did it taste? Awesome! The chili flakes gave it a nice little kick along with the chipotle chicken. The asparagus gave it a little crunch and the cream cheese really balanced the whole thing out. This was a nice quick and filling meal that is holding me over till lunch pretty well. The macros for the whole thing were 7c/3f/33p! Can’t beat those poverty macros. 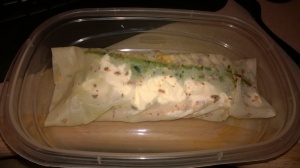 Hey guys and gals! So this week has been pretty crazy at work so I have been a bit quiet here and haven’t had time to edit any videos but I do have a shopping with and I will have a cooking with com in up soon. I did end up working from home yesterday because of the craziness and on my lunch I decided to get out of the house for a bit and went to a couple of stores. I started off at World Market where I picked up some sweets and some spices. I originally just went for some cookie called Pizzelle that someone on the IIFYM Facebook group recommended. I ended up picking up a lot more. I will show this all in the upcoming video but I wanted to talk about the Latin spice rub and that I used on some chicken today and it was GAF! I also picked up some chocolate chip coconut scone mix that took maybe 20 minutes to make and 15 of that was cooking time I’ll let yinz know how they are tomorrow when I have them for breakfast. After World Market I stopped at Sur La Table which is a kitchenware store. I picked up a Viante intellesteam and so far I am really happy with it. I have only had steamed chicken and I was excited about the new purchase so I also steamed some 94/6 ground beef for dinner tonight. Both came out awesome. I steamed tomorrows morning snack of chicken with tandoori seasoning, lunch which is some steamed MahiMahi, and dinner is Dover Sole. Check out the pictures below for some of this.

I also succeeded in making a waffle batter. They came out awesome and the volume of the meal was great! Here is the recipe:

Whip the egg whites till a peaking a bit, add the rest of the ingredients and continue to mix. Heat a waffle iron and cook on medium heat. This make about 5-6 waffles which is one serving. The macros are 41c/28f/63p. I am going to work on reducing the fat by trying to pull some of the eggs out as they add 15g and also you can reduce it by pulling out the PBlean that added 6g, or use a different type of flour. I added pictures below.

Thanks for checking out the post guys and be on the lookout for videos of all the goodies I bought and upcoming waffle and cannoli videos.

Here are the scones that I bought with the macros in the picture.

Here is the new steamer

I picked up a stick blended and matching mini food processor.

Picked up a sandwich maker and will have a sandwich recipe post coming up.

Ingredients for the waffles.

Here is the waffler batter about to go on the iron.

Here is the first waffle. Turns out I needed more batter

Now we are talking!

Here is the full stack of waffles, One serving!

After a couple of bites.

Cooking up my beef and mushrooms for dinner,

The mushrooms finished first and were gone before the beef was. Egg whites on the side.

Nothing to do with this post, but the cake that I had today. Ill post some of my day of eating stuff tomorrow.

Started off the day with what I am calling a breakfast Rueben. I made two pieces of French Toast and made and egg over easy. I topped that with some sauerkraut that I made in the slow cooker a couple nights before, 2oz of boars head corned beef, and a slice of Swiss cheese. Instead of 1000 island I covered it in Walden’s farms pancake syrup. It was delicious and I am usually not a French toast person. The next picture is my pita pizza. Toppings for the pizza were morel mushrooms, pork tenderloin, and a little chopped up scorpion chili to add some burn! Finally is a peanut butter marshmallow cake cover in Arctic zero choco peanut butter and whipped cream cheese, fat free whipped topping, and raspberry preserves. Everything today was awesome and high volume! I’ll have the macros up shortly and I recorded some more video that I’ll get edited and posted tomorrow. 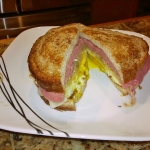