Actually today was chest and back but I hit tri’s with chest so counting it!

How’s it going guys? Today was a pretty standard meal day up until dinner and dessert when I stepped out of the box a bit. For dinner I changed the pizza game up a bit with this new Mountain Bread wraps that I found. I decided that I would try some pastries with the toppings that I was going to do a pizza with. What did I discover?

So as I work on my wrapping of these I am going to hold off on making a video about making them for now but I promise I will keep trying. The macros for the dish wasn’t bad at all and ended up leaving me extra room for more fun stuff for dessert. The macros are 21c/12f/34p. The fats can be reduced by using egg whites, fat free cheese and a leaner meat. I plan on trying this with some other fillings as well maybe even go a little Asian or Mexican with it to get some different flavor profiles. Let me know what you guys think and what your thoughts on some fillings could be. Thinking also of rolling some up and making some fluff and piping it inside as a “pronoli” or protein cannoli! In all I have big plans for the Mountain Bread. End this rant!

Cooking up some dinner.

Mountain Bread Oat filled with pork, cheese, and mushrooms, a side one egg omelet, and some marinara for dipping.

Inside puffs. These were great!

Only using one of the wraps gave me an additional 14 carbs to play with for dessert and I had some options that included crumbles of chocolate chip cookies which might be in the cards for tomorrow, Hershey’s cookies and cream cereal, Fiber One Cereal for that extra fiber, fruit, or what I ended up going with was Reese’s puffs! I have been afraid to go to some of the sugary cereals because I tend to start to crave them but I figure the way that my weight has been going I can keep strong and that is what I am doing! I hit 171.8 yesterday which is again a new low! So I used my standard cake recipe, topped it with some Chocolate syrup and Chocolate Arctic Zero then topped that with the Reese’s puffs. I was in heaven! Macros are 24c/10f/36p. 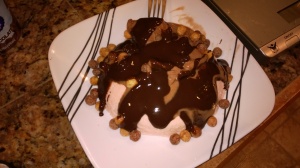 Maybe instead of tri day I’ll call it try day because of the different foods I tried today. The weekend is tomorrow and I plan on posting up 3-4 videos including the tuna casserole and a pizza recipe. Watch for some crazy stuff coming up!

Today for dinner I decided to give the Mountain bread that I found at Whole Foods a try. I used the rice version for this one and filled it with 60g of pork, 25g of mushrooms, 42g of spinach, 42g of broccoli, 1 slice of swiss, and 31g of pizza sauce. The top crisped up really nice but could have given it some more time so that the insides were a little hotter and the bottom and sides were a little more crisp. In all it was great tasting and I would definitely buy and use it again. Its got great macros too. the whole meal was 33c/10f/33p and the bread was 26c/1f/5p for two sheets. I can see this being used for a lot of different pastries, using a single sheet for a pie crust, or trying to make some dumplings. Going to start coming up with some ideas. Hopefully this is a product you can find and try out.

Another product that I wanted to talk about was MyOatmeal. This is custom flavored oatmeal that you can make some great flavor combination. I have two flavors, Key Lime, White Chocolate, and Graham Cracker Crust and Pumpkin Spice, White Chocolate, Graham Cracker Crust. I used steel cut oats for each combination and I have been soaking the oats overnight with some unsweetened vanilla almond milk and it comes out great! Today I had the key lime and it kept me full through my workout. They also do flavored powdered peanut butter! I highly recommend checking out http://myoatmeal.com!

The ingredient for my dinner pastry.

The pastry just out of the oven.

Flipped the pastry out.

Diving into the dinner!